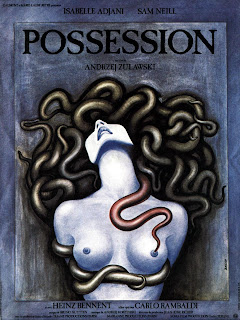 This evening got me thinking about a movie which I love, Andrzej Zulawski's POSSESSION. The reason I love this film as much as I do is not only because it's a great, obscure piece of cinema, but mostly because it was branded upon my psyche at an early age. I don't exactly remember the circumstances leading to my discovery of this film, but I do recall seeing a television spot circa '82 (possibly on Showtime) for the American (butchered) release. A brief shot of Isabelle Adjani astride her other, other lover (if you've seen the film, you'll know exactly what I'm referring to) had to be the most alarming visual I could have witnessed at the tender age of five, but there it was. It took me years to figure out the title of the film, let alone who starred in it, but when I finally did (via a big boxed Canadian VHS and later in it's original form on DVD via Anchor Bay) that mystical puzzle had been solved. Strange to think I caught a glimpse of this at that age, but I did and I'm glad I held on to that memory all those years.

Anyhow, this particular post is nothing more than an excuse to chat the film up and serve this great little morsel which I stumbled upon during my recent YouTube stroll: a great tribute by MickTravisBickle, a person who, no doubt, appreciates the film, but also has tremendous taste in music (gore and spoilers abound, kiddies)...

Posted by Nathan Martin at 11:24 PM No comments: