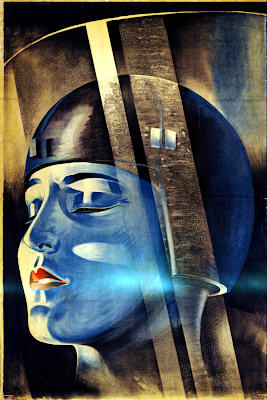 I had no idea that this was on the horizon until a friend linked the trailer on his site. It seems Kino has outdone themselves once more with yet another, but ultimately quite impressive, restoration of Fritz Lang's masterpiece, METROPOLIS.

A few years ago, Kino delivered an astounding restoration of the film on DVD. Preserving the correct film speed would have been miraculous enough, but the frame-by-frame clean-up is superb, making that version the definitive one... until now.

Somehow, Kino has managed to track down over twenty minutes of lost footage, presumably from two recently discovered prints. And, the good news is, we'll be able to indulge in it's wonder quite soon.

I was hoping to showcase the trailer here, but embedding has since been disabled, so please check it out HERE. 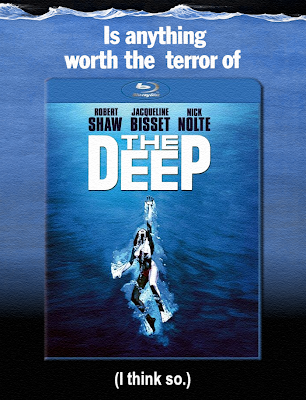 I'm in deep. Deep into Blu-ray, that is.

I've been resisting the format for quite some time, but finally caved upon viewing the cover for the Blu-ray edition of Peter Yates' THE DEEP.

THE DEEP is a favorite of mine, since I'm already obsessed with JAWS and this was the second Peter Benchley novel to be adapted to film. Oh, and that Jacqueline Bisset scene... you know the one.

Anyhow, I've owned it on VHS and DVD, but was shocked to see that the Blu-ray contained two sought out special features (the DVD and earlier Laserdisc had absolutely nothing): The CBS network special, THE MAKING OF THE DEEP (hosted by Robert Shaw) and select scenes from the 3-Hour television version. WHAT?! I must see these extras! So, the next step was purchasing a player and I went on the cheap with the $78 Magnavox bare-bones player at Wal-Mart. BD players don't get any cheaper and, for what it's worth, this is an exceptional player. The downfall is that it isn't BD Live enabled, but at this point, I don't care about that.

Happy to say that the extras on THE DEEP were well worth it, for me anyway. Although, there still is no theatrical trailer available and it would be nice to have the option to incorporate the televised scenes into the theatrical cut. These scenes are great, especially the prologue (featuring Cameron Mitchell!) and they add to the story.

So, now I was truly curious as to what other obscure films were floating around on BD with such rare features. As of yet, I haven't discovered a film to rival THE DEEP in this arena. Most films contain the same extras as their DVD counterparts. But, I've since discovered that there are quite a few exceptions to this rule. If BD is the superior format, why don't most companies do a better job in rivaling the extras of the earlier DVD? Makes no sense that films like THE AMITYVILLE HORROR, CARRIE, COMMANDO, THE GRADUATE, TOTAL RECALL and countless others don't live up to this. ROBOCOP has been issued twice on BD, but both versions are the 'R' rated release. Why would I want that? Oh, and thanks to Fox for retaining all the special features for PREDATOR 2, but none of which, aside from the trailer, for the original PREDATOR. That makes a lot of sense. People do care more about the sequel. (Insert fart sound here.)

I agree that BD is amazing, but studios need to live up to the format's potential. For the most part, I'm only purchasing titles that have the same extras, if not more, and still holding on to my DVDs. For the undemanding, in terms of extra content, BD might be the right choice, but I want those special features that I'm used to. Why downgrade, when we should be upgrading?

I like the idea of former 2-disc DVD releases fitting onto a single Blu-ray disc. (A great example is the release for DONNIE DARKO, which incorporates both prior DVD releases onto one disc, and retains the supplemental content of both.)

As much as I am impressed, I know that the completist in me will always have DVD.
Posted by Nathan Martin at 1:45 PM 2 comments: