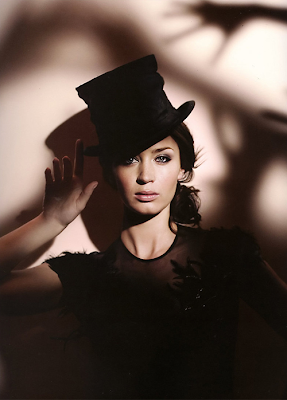 So, I love Emily Blunt. 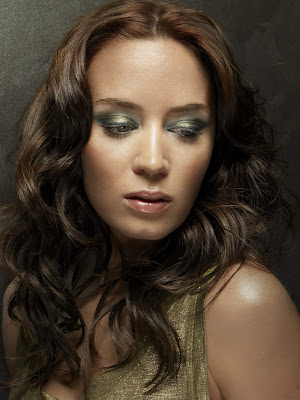 Can't get enough of her. 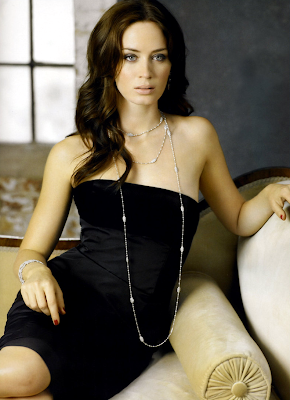 And, I absolutely cannot wait for THE WOLFMAN to be released, finally. 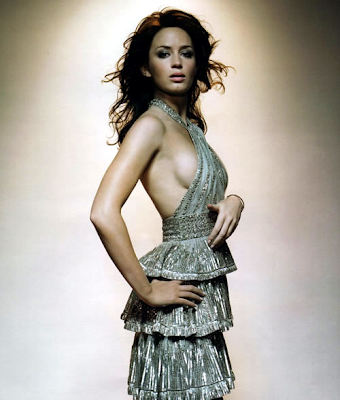 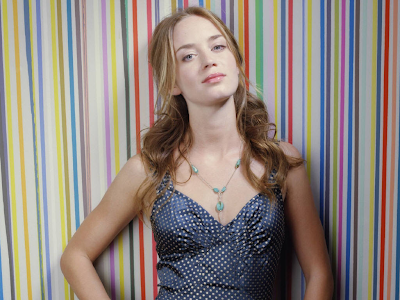 ...this entry is nothing more than a shameless excuse to post some lovely pictures. 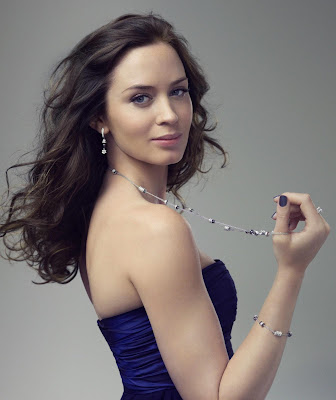 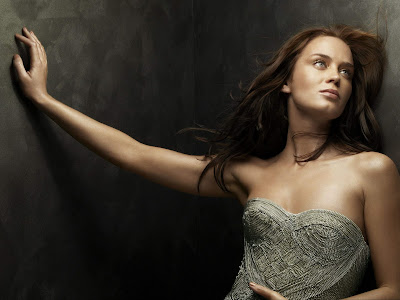 That is all (for now).
Posted by Nathan Martin at 3:11 AM No comments:

Email ThisBlogThis!Share to TwitterShare to FacebookShare to Pinterest
Labels: Emily Blunt, The Wolf Man, The Wolfman

The Naked Truth About Naughty Nina 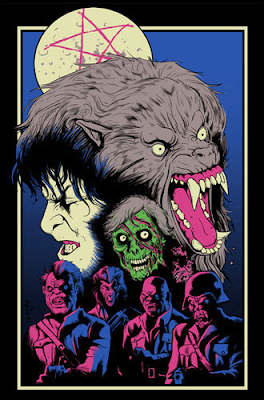 "Those sheep shit on my pack."

"What are you worried about Debbie Klein for, anyway?
There are gonna be plenty of girls on this trip."
"Yeah, we're off to a great start."

"She means in the cinema... that film with John Wayne."
"Right! With Laurence Harvey. Everybody dies in it. Very bloody."
"Bloody awful, if you ask me!"

"YOU... made me miss.
I've never missed that board before."

"Where to now, Kessler? Duck's Breath?"

"That was a weird fuckin' place!"
"It was man. But, boy, they could play darts."

"These dumbass kids.
They never appreciate anything you do for them!"

"Shall I be forced to feed you, David?"

"Life mocks me, even in death."

"Have you tried talking to a corpse? It's boring!"

"The wolf's bloodline must be severed.
The last remaining werewolf must be destroyed.
It's you, David."

"I will not be threatened by a walking meatloaf!"

"Fee-Fi-Fo-Fum... I smell the blood of an Englishman."

"I didn't mean to call you meatloaf, Jack."

"I can assure you this is not the least bit amusing." 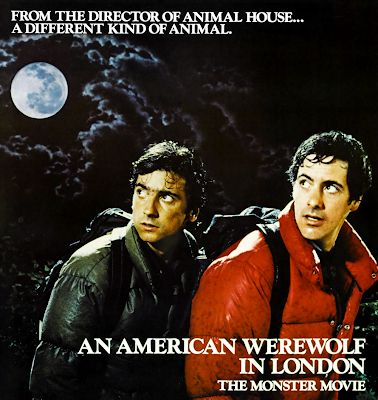 The "Full Moon Edition" 2-disc DVD released last week and being the "AmWolf" nut that I am, I triple-dipped. Obviously, this release was designed to coordinate with Universal's remake of THE WOLFMAN (also featuring make-up effects by Rick Baker) which was supposed to release mid-October of this year, but has been pushed to February, 2010. At any rate, this edition succeeds Universal's previous "Collector's Edition" and cancels it out as it features all of the supplemental material from that disc, plus a new Rick Baker featurette and an all-new documentary... 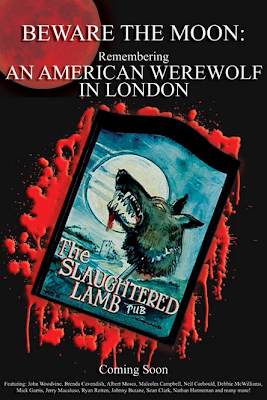 This 100 minute retrospective exceeded my expectations, beautifully. Unlike an American-based retrospective that might only secure stateside talents like Landis, Baker, David Naughton and Griffin Dunne, this one's made by a Brit (John Davis) who has access to a great degree of the additional cast (i.e. Jenny Agutter, John Woodvine, David Schofield, et cetera), crew and, above all, the locations. (To see Davis walking down the same country roads, shot from the exact angles used for the film, really is a marvel.)

About the only two living actors missing from the documentary are Rik Mayall and Frank Oz. Nearly all other bases are covered. Amazing stuff and it's always a joy to hear Landis recount his experiences. Baker, Dunne, Schofield and Naughton are also quite entertaining. 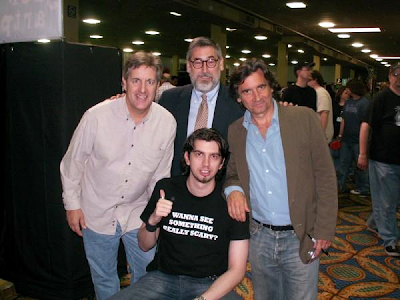 Paul Davis (seen above with Naughton, Landis and Dunne) is a passionate fan after my own heart. Thanks, mate!

As for everyone else...
See You Next Wednesday!
Posted by Nathan Martin at 9:08 PM No comments: 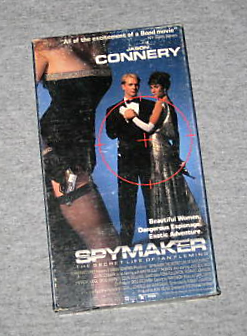 ...that was my question.
Ignorance is often the reward of trying, particularly on eBay.
Being a nice guy, I used to let eBay sellers know when they've listed something erroneously. I'm a laserdisc fiend, so I often come across people passing CED video discs off as LDs, which is an entirely different format. Of course, this is done out of their not knowing just what darn fangled thing-a-ma-jig they got fer sale. "It says disc. It's a movie disc... with lasers. Shoot! I dunno! Let's put it on eBay and make a damn near forchin!" So, I used to send them a notice educating them on what they're selling and how it should be marketed, so they can sell the damned thing and not piss off their customers. Just a kind gesture on my part, but I stopped doing it long ago, because it's an unending cycle. I guarantee there's at least one such mistaken auction running right now.
But, when I'm interested in purchasing an item and must ask a legitimate question to seal my interest, and the response I get is so off the charts, well, it makes a fella kinda nuts.
I had such a wonderful moment today. I've got a lousy copy of SPYMAKER: THE SECRET LIFE OF IAN FLEMING (an EP release) and am always on the hunt for an SP mode release. So, when I see a VHS at a reasonable rate (it is a rare film) and such information is not supplied, I must ask the quality question.
So, here's a transcript of the encounter...
ME: Do you know what speed the videotape was recorded in, SP or EP/SLP?
SELLER: it is a comercial release vhs not a copy.
ME: I realize it's a commercial release and not a copy. That was not the intent of my question. SPYMAKER was manufactured and released twice by Turner Home Entertainment. Initially, in the superior SP format and later re-issued in the inferior EP mode (lesser quality). If it were EP, the information should be listed on the back of the cover. The actual gate on the videotape itself might be red, rather than black, distinguishing the different releases. If the tape were SP and you had mentioned it in your listing, you surely would have received a higher bid due to it's rarity.
Congratulations! You sold your copy for only $1.25, which, in either mode, the film is worth far more. Good job on your auctioning skills! Schmuck.
Okay, that last bit I added. A blog exclusive!
Posted by Nathan Martin at 12:47 AM No comments: 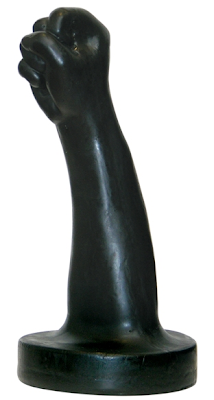 And, now, the further adventures of my favorite IMDB idiot, "fistoffury"!

fistoffury on Michael Jackson's daughter, Paris:
If Paris ever has a boy child she might name him Michael.


fistoffury on FIRESTARTER (1984):
So who is better, Charlie or Human Torch? I would say Human Torch, who goes by the name Johnny Storm, is better. He can create hotter fires not to mention shroud his body in flames. He can also fly. So Human Torch is cooler. FLAME ON!

My response:
Harvey Fierstein could scorch them both.

My response:
Isn't it also true that you have a general affection for anyone named "Jessica"?


fistoffury on Nick Lachey:
Its too bad that Nick isn't a Sith Lord. If he was he could do Force Lightning on Jessica, just like the Emperor did to Luke in ROTJ.

My response:
It's too bad that the population of your fantasy world is "one". Or, is that "negative one"?


fistoffury on YOU CAN'T DO THAT ON TELEVISION (1979):
Ross, the producer of the show, played by the late Les Lye, I don't remember him ever getting slimed or soaked from saying the magical words, "I don't know," or "water," but recently I stumbled upon some youtube videos that have multiple scenes of him getting repeatedly slimed and soaked. So does anybody know what that is from? I never did see him get slimed or soaked when I was watching the show.

My response:
The YOU CAN'T DO THAT ON TELEVISION wrap parties were the stuff of legend and quite notorious for that sort of thing. Not only were people getting slimed and soaked, they were also getting bonked, toasted, clobbered, oft-considered, wind-jammered, jan-hammered, spadoinked, cajoled, teetered, tossed, fadoodled, brackishly bridled, catnipped, lozenged, influxed and pepper-sprayed. The latter, of course, was certainly a "before it's time" occurrence, that managed to arrive right on schedule. The grate Kermit Schaeffer wrote a rather racy novella, which is the nearest thing next-to-impossible to find, based upon these particular extravaganzas and other backstage, off-camera tom foolery, entitled "What You Couldn't Do On Television, You Still Can't Do (...But, You Can Read About It All In This Here Book!)," printed only twice by Tamley Publications.

* I haven't the foggiest who Jessica Koen is either.
Posted by Nathan Martin at 6:12 PM 1 comment: 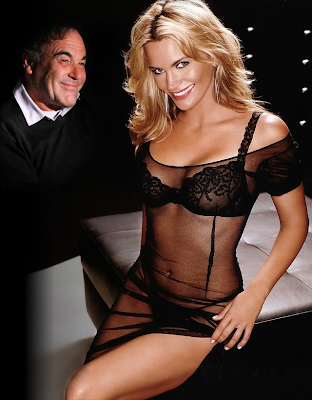 Is Oliver Stone a fan of the SPECIES films?

I asked myself this tonight as I watched SPECIES II. Having not seen the film in years, I forgot James Cromwell being in it. In the film he plays Senator Judson Ross, whose son Patrick, an astronaut-turned-possessed alien creature, has been up to no good with the ladies. Fearing such exploits could jeopardize his political reputation, he lectures Patrick, expressing his disappointment. During which, Cromwell spouts the line, "You're a Ross. Behave like one."

Flash forward to ten years later in the Oliver Stone film, "W." (not to be confused with the Twiggy flick) where Cromwell portrays George Bush, Sr. and in a moment of disappointment over Bush, Jr.'s drunken antics, he spouts the line, “What do you think you are, a Kennedy?” “You're a Bush. Act like one.”