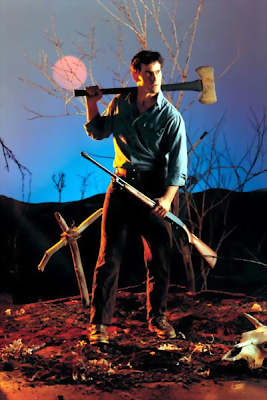 Just came across this comment from Sam Raimi.
My opinion follows.

"I have talked with my partners about having a young director come in and remake EVIL DEAD. That film was made in 16mm on a shoestring budget and blown up to 35mm. The visual effects are crummy, it was done in mono, not even stereo, let alone 5.1. What you could do with it now would be so much better. I think if you had a new director using the full power of 35mm and 5.1 sound, you could really make a pretty socko presentation. It was always meant for the big screen, but never really seen on the big screen."

You know, I am gut-clenchingly sick of remakes and a remake like this is the worst kind. Why? Because, it's truly a sad case when a filmmaker like Raimi, whom I thought I idolized, really doesn't understand the impact of his little shoestring 16mm mono film. Raimi obviously knows the monetary potential of the concept, but is it necessary to bemoan a film that didn't have today's technical "luxuries" at it's disposal?

THE EVIL DEAD should never be considered "crummy," old or lame. You won't see George Romero, John Carpenter or Tobe Hooper talking shit about their independent seminal slices. That's because they are of a different class. They understand that their films, despite whatever limitations, are cinematic achievements and a document of the times in which they were made. I never thought I'd say this, but "Mr. Raimi, you are a fool." And, to think that I thought you were a true renaissance man. For shame!

Now, run along and make your cookie-cutter SPIDER-MAN blockbusters for the m'asses to enjoy.
Posted by Nathan Martin at 12:49 AM No comments: 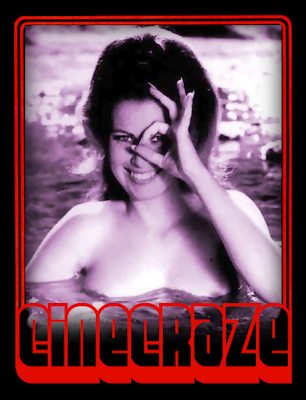 Indeed it is, Zucco!
That goes for both Danny and George!

Anyhow, I refused to be depressed and "out of sort" over the whole YouTube yankfest, so I've created another channel. In a way, this could turn out to be a good thing, a fresh start. This channel is actually the sister site to this blog, or vice versa, depending on your area of travel. I'm not exactly sure what I want to do with it, perhaps the dreaded "vlogging" with reviews and such. Of course, I could show off my movie collection, but aren't there quite enough of those being showcased? Also, I'm not one to grandstand (too much).

Expect the occasional trailer, TV spot, radio spot or promo. Unsure as to whether I should re-post any of my compilations or the Double Feature Trailer Shows. Whatever I choose to do, I'll explain here.

Anywayz...
If you'd like to subscribe to "my new you," please do. Friend requests and comments are gladly welcomed. So, here's the LINKAGE already!

TELL YOUR FRIENDS (IF YOU HAVE THEM)!

Happy trails...
-Nathan
Posted by Nathan Martin at 12:04 AM No comments: 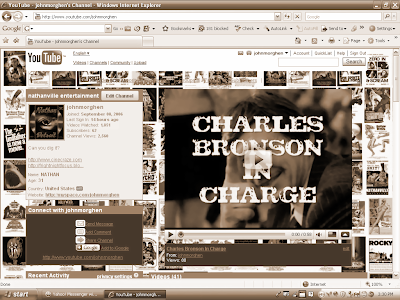 Not that there hasn't been anything to write about, or the desire to do so... I'll own up to being lazy. We'll just leave it at that, shall we?

A lame thing happened to me on Friday. Actually, in an odd way, it was a good thing. Good enough to bring me out of my writer's block, at least.

Typical Friday morning when I'm not working, I check my e-mail and login to my various "communication sites". Off I went to YouTube. I was pleased to be greeted by another of AustrailianRoadshow's private video offerings in my inbox. I clicked on it, left the room for a bit while it was loading, came back and my YouTube account was closed. Gone forever or "suspended permanently" in YT terms.

What happened? Well, during this same time that I'm on there, an account created that same day, seemingly for that exact purpose, filed claim of copyright infringement over one of my videos. The video in question was titled "Winkles Cereal," a commercial parody excerpt from the 1977 film, PRIME TIME. The company filing the claim was Taurus Entertainment. Taurus claimed ownership of the film's copyright, which I seriously question because, to my knowledge, the film's rights were never renewed and have since fallen into the public domain.

A little back history on PRIME TIME...
PRIME TIME was another in the string of sketch comedy films of the 1970s, an era that truly began with Ken Shapiro's remarkable THE GROOVE TUBE. I loved this genre. Anyhow, each of these films were independent and never financed by a major studio, yet PRIME TIME was the exception. Warner Bros. produced PRIME TIME and held the initial copyright, yet got cold feet about distributing it due to it's raucious nature. Cannon Film Distributors (pre-Golan-Globus) released the film briefly in theaters and licensed it's home video usage (along with many other Cannon titles) to Paragon Video Productions in 1982. Of course, Paragon is long gone, but some of the films on that label, particularly the Cannon titles, have seen a resurgence with other companies, yet PRIME TIME never did. I believe it's last printing was circa '84-'85.

So, nothing happened with the film and, presumably, since it wasn't a Cannon production in the first place, rights were never renewed and the film began resurfacing over 20 years later in DVD movie collections chock full of public domain material. Not to mention that some PD sites have listed it, along with other sketch comedy films like TUNNEL VISION and LOOSE SHOES, as being in the public domain.

Which brings me to Taurus Entertainment...

Where do you guys get off?! As a corporation, I dug you back in the day. Waaaayyyyy back in the day, like late '80s, maybe early '90s. We're talkin' BEST OF THE BEST era, those TWO EVIL EYES days. And, yeah, I know you hold copyright on George A. Romero's epic DAY OF THE DEAD, even though you didn't make it. So, that's where my interest ends with you. Your acquisition of those rights has poisoned your blood stream with ideas of bank-off possibilities. Like soiling the legacy of the great Romero with... dun-dun-dun... DAY OF THE DEAD 2: CONTAGION. Newsflash! DAY OF THE DEAD is already a sequel to two other films, so, you can't make a PART TWO to something that's already a PART THREE. Who in the hell do you think you are? NATIONAL LAMPOON'S CHRISTMAS VACATION 2?! If that weren't enough, you had to then spoil the hopes and dreams of Romero's fan base with CREEPSHOW III. For years, we've been begging for a third CREEPSHOW, only, we wanted a quality film from Romero and co., or at least, one with his blessing. Instead, we got your so-called sequel. That film receives the "Whuh the fuh?" award for when I stumbled upon it at the new release wall. Have I seen it? Nope. Should I see it? Nope. Same with DAY OF THE DEAD 2: CONTAGION? Yep.

Then, we have the "time to make the donuts" award for the DAY OF THE DEAD remake. The remake that came one year after you decided to make a sequel to the original?! That's right. What's up, Taurus Ent? CONTAGION didn't bring in the big bucks you wanted? Too bad. Have I seen your remake of DAY OF THE DEAD? Nope. Why not? Because, I'm on to your game, and much like an old girlfriend, after a while, you just don't care anymore. I'm so over you piss cats and Friday's seizure of my nearly 4-year-old account has sealed it with a most deadly kiss. You guys suck, for good. And, I still don't believe that you own PRIME TIME. In fact, I'm pretty damn sure of it.

At any rate, that's said and done.
There's no going back, unfortunately.

Just for kicks...
Here's Taurus' account, which, as mentioned before, was ironically created the day of my channel's demise.
Posted by Nathan Martin at 10:26 PM No comments: