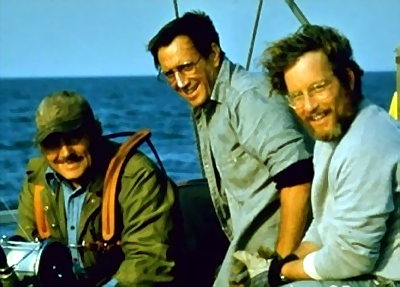 Being a life-long JAWS fanatic, I always wanted a toy line.
Forget the Matchbox Amity Police car or even the McFarlane Orca scene, I just wanted some damn action figures to fit nicely with the giant, snapping shark with the rubber-banded-jaws from my ol' JAWS game.

Apparently other finatics have wanted the same thing. Some have even gone to the lengths of creating them for themselves.

Here's a link to an article at JAWSmovie.com showcasing the devotion of one such fan, Mike Lorenz.

Pretty damn cool, but I can't help remarking that the Hooper fig looks nothing like Richard Dreyfuss to me. Resembles either Hugo Stiglitz or a bearded Cornel Wilde. Perhaps a series of TINTORERA or SHARK'S TREASURE figures are in Lorenz's future?
Posted by Nathan Martin at 4:41 PM 1 comment: