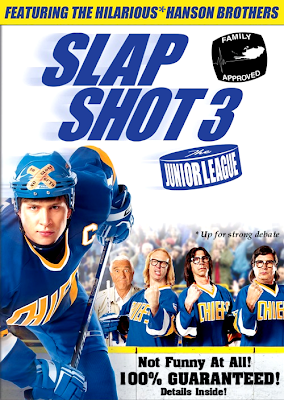 I recently came across this DVD at a video store and a cringe-inducing moment ensued.

Of course, I didn't bother with the first SLAP SHOT sequel/abomination, but this latest entry makes that film look appealing... nearly THE GODFATHER, PART II-like by comparison.
Oy.

Anyhow, I couldn't help scouring the IMDB boards for the eventual reviews by those who fell victim to the curse of the extremely bad straight-to-video sequel. You know, the morons who weigh in with "This was horrible!" Yeah, no shit. Maybe it's my street skills, but I gathered that by simply looking at the cover. (Key words: Universal Family Home Entertainment)

Below is my reply in response to an IMDB thread titled "Where Are The Hanson Brothers?"

How about, where are the Hanson Brothers right at this moment? Perhaps, they're in an office somewhere, going over DVD sales totals and signing contracts for:
SLAP SHOTS 4: BROKEN ICE & FART JOKES
SLAP SHOT 5: BENEATH ALL EXPECTATIONS
SLAP SHOT 6: TO THE NUTS
SLAP SHOT 7: IS THIS THING ON?
SLAP SHOT 8: STEPHEN BALDWIN'S BACK!
and, the oft-anticipated 9th entry...
HANSONS GO TO HELL: THE FINAL SLAP SHOT

In closing, a reply to another thread on the subject...
It's best not to associate this film with Paul Newman's legacy, in any way. SLAP SHOT was never meant to be THE BAD NEWS BEARS and finally we have a fate worse than viewing the original in it's crudely edited-for-television form... a wholesome, family-friendly sequel.

But, that's just my opinion.
(And, yes. I doctored the DVD image above ...appropriately.)
Posted by Nathan Martin at 12:26 PM No comments:

IMDB Idiot of the Moment: sirbingo

The following was originally posted on IMDB
The place: Message board for Paul Verhoeven
Look for me, "johnmorghen"!

sirbingo:
What happened? Where has Paul V been? I like his movies...sci-fi, violent, action...But I have not seen a new film by him in years. Does he do these type of films anymore.

Grimlocksnewbrain:
After Hollow Man, he became bored with how he wasn't able to express himself properly with Hollywood films and he returned to Holland and made Black Book, which came out last year.

sirbingo:
Or maybe it was b/c Hollow man was a hollow movie. Face the facts his movies became flops. Look I once was beet up in a basketball playground...I stop playing basketball not because I did not like b-ball but b/c I had my a$$ handed to me. Same thin is for Paul.. I know more Paul V backhistory then you.

Since you "once was beet up in a basketball playground," what detergent did you use to get the beet stains out of your clothing? I'm only asking this because I had a similar situation, but, it involved the sport of badminton. My opponent thought he was the court jester and launched a juicy beet rather than a birdie, during play. Luckily, I was able to salvage the situation by making a joke. I grabbed the nearest mic and belted out, "Ladies & Gentlemen, The Fabulous Beet Stains!" and the crowd went positively cuh-razy! Guess which celebrities were at the event? Diane Lane and Paul V.! Not Paul Verhoeven, but Paul Vermicelli, the man who invented vermicelli! Call that my purple moment! It was so embara$$ing, but fun!

If you're anything like me, then you might have been a die-hard MSTie during this period and craved only one thing on Thanksgiving... Comedy Central's annual promise to air a continuous 28-hour marathon of arguably the best television series of all time, MYSTERY SCIENCE THEATER 3000.

Like me, you probably have terrific memories of this annual event and long for a revival as the years go by. While we've had a resurgence with Mike Nelson's Rifftrax and work for Legend Films, and MST creator, Joel Hodgson's return to form with his CINEMATIC TITANIC (which reunites many of the original show's cast and crew) we've never had it as good as we did back in the MST3K salad days... and, unfortunately, never will again.

So, here is my feeble attempt to recreate that honored tradition in viral/bulletin/blog form. (Please excuse the extreme lack of a full 28 hours of programming.) A hearty thanks to all those wonderful MSTies that have uploaded these nuggets of hilarity to the monster of wonderment that is YouTube. I couldn't have done this without you! (Of course, it's highly illogical that you know me or that you would actually be reading this, but thanks anyway!)

Okay, here's a somewhat sequenced set list of clips (including commercials!) and my humble advice is that viewers allow each vid to load in order of appearance before jumping in.

We're about ready to start our adventure! Insert your choice of time machine sound effect here. Perhaps a "whhrrrrring" humming-type sound mixed with possibly a garden trowel scraping the inside of a toilet bowl will do.

Without further ado...
Turn down your lights (where applicable)


"Jungle Goddess" (due to poor video quality) has been replaced with...
"Hercules Against The Moon Men" Part One


Poopie Parade Of Values, Part One


BONUS CLIPS!
The Sandy Frank Theme Song (from "Time Of The Apes")


The Torgo Sketch (from "Manos: Hands Of Fate")


There you have it, folks!
Happy Turkey Day & Keep circulating those tapes! 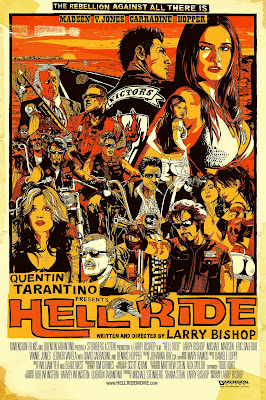 I recently had the pleasure of viewing HELL RIDE, the latest film written, directed and starring a man so well-versed in the hey-day of the biker film trend of the '60s and early '70s, Larry Bishop. Here, it's my belief that, Bishop has succeeded in providing a welcome return to this bygone grungy, fuel-charged film craze.
Despite Bishop's well-intended efforts, there are plenty of naysayers out there, picking and prodding at the film's story, characters, et cetera. Who in the hell cares about these things?! It's a BIKER film! This was never a style of film known for it's complex characterizations or astounding dramatics. A biker film is an acquired taste, and I'm not referring to the most famous film of all, EASY RIDER, the one that broke through those conventions.
The key ingredients to any worthwhile biker flick are: sex, drugs and rock 'n' roll. Bishop's film contains all of these elements and more, including a great cast of scene-chomping veterans: Michael Madsen, Dennis Hopper, David Carradine and Vinnie Jones. Not to mention, there are several nods to earlier films in the genre, including musical cues from THE WILD ANGELS, HELL'S BELLES, THE SAVAGE SEVEN and "Jenny Take A Ride" by Mitch Ryder & The Detroit Wheels, which was featured in the notorious Joe Namath/Ann-Margret biker flick, C.C. & COMPANY. So, I have to ask, what more could a biker film enthusiast want?!
Wait a minute, could it be that none of these naysayers have seen a true biker film, after all? Would they know who Adam Roarke is? How about other genre staples like William Smith, Ross Hagen, Luke Askew or John "Bud" Cardos? I'm sure they're aware of Peter Fonda, Hopper and Jack Nicholson, but I'm sure they'd be hard pressed to name the other biker flicks these actors had done previous to EASY RIDER.
If you are a true biker film fan, then I'm willing to bet you will get a nice jolt of nostalgia from HELL RIDE. Bishop is in top form with this one. Sure, the character's backgrounds may come off a bit hazy and could have been lost in the milieu of creating the film's authentic vibe (enter style vs. substance argument here) but, ultimately, such details are not that big of a concern to the overall experience.
At any rate, the film serves as a nice capsulization of Bishop's involvement in the genre and marks the 40th anniversary of his first cycle flick, THE SAVAGE SEVEN. In fact, HELL RIDE almost serves as a sequel to that film, as links are clearly evident. The pivotal "Cherokee Kisum" character is a perfect example. In THE SAVAGE SEVEN, Adam Roarke portrays the leader of a biker gang who infiltrates a Native American community. His character, "Kisum," falls for a local Indian girl named "Maria". Had the script for HELL RIDE been tweaked a bit, "Cherokee Kisum" could have been the offspring of these characters, adding further substance to her already symbolic role.
Whatever the case, I felt this HELL RIDE was an enjoyable one and I'm a sucker to see these cats on screen together, knowing full-well that they all had a blast making the film. It would be nice if someone out there had the sense to put on a Larry Bishop biker film marathon, showcasing the AIP trinity: THE SAVAGE SEVEN, ANGEL UNCHAINED and CHROME AND HOT LEATHER. Then, top it all off with HELL RIDE as the main attraction. Biker flick Heaven... count me in! 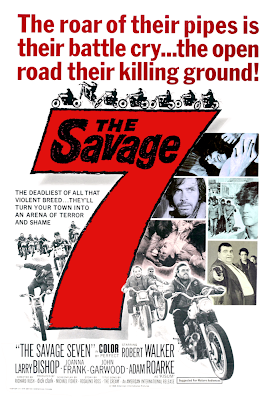 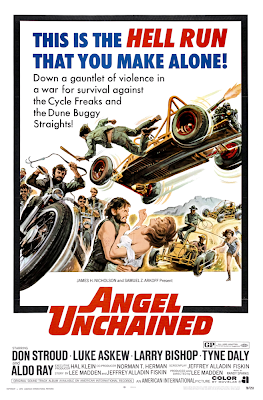 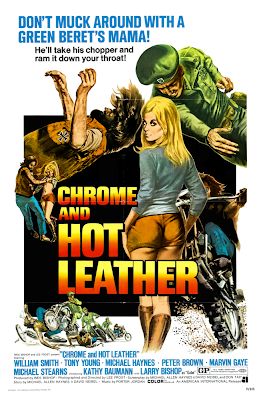 Posted by Nathan Martin at 7:02 PM No comments: 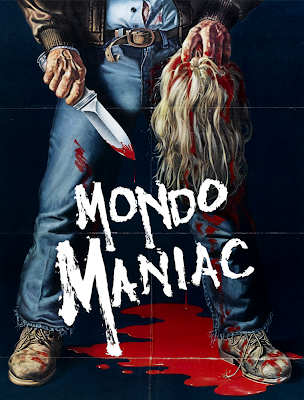 My new cyber-chum, Heather, has quite the impressive credentials. Not only does she know her stuff, she applies said knowledge in a desirable fashion: creating an appreciative ode to all things cult, kitsch, grotesque, beautiful, bizarre and mind-blowing in the form of a public access series hell-bent on delivering the goods, entitled MONDO PAZZO.

Check out these tasty segments from Heather's YouTube channel:


And, lastly...
Some much deserved Joe Spinell appreciation...


Viddy well, I must say. Wouldn't you?!
Posted by Nathan Martin at 7:19 PM No comments: