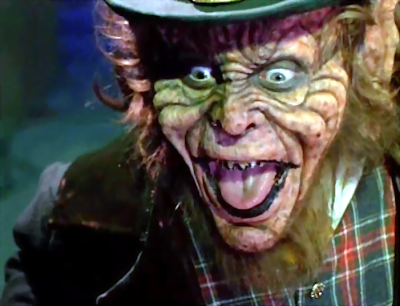 True confession time, folks!
Over the past few weeks, I've become quite the fanatic of the LEPRECHAUN film series. Whuh?
I know, I know. Believe me, I know.

Here was a series of films that I truly had no interest in, for whatever reason, I can't recall. Perhaps, because they were so corny, but that's never stopped me before! I honestly avoided these films and never considered them worth my time. I was wrong. Dead wrong.

I'm proud to finally say that I love these damn flicks! I cannot believe I've been missing out on their gleeful nature this entire time. What a fool I've been. I've always been a fan of Trimark Pictures and if New Line Cinema is the house that Freddy built, then Trimark is certainly the house that Lep built. A steady breadwinner of a franchise, and very much like the aforementioned Freddy flicks.

Why love it so much?
Two words... well, one full name, really:
Warwick Davis.

Davis makes these films so much fun to watch based on the fun he's having in them. If you don't take everything to heart and are out for a fun time, his vibe is truly infectious. He is the sole reason the franchise can go from film to film consistently being inconsistent and embracing the virtue.

The most basic premise ever has a century-old Leprechaun who wants his gold. That's all. And nearly, every film centers around one gold schilling gone missing and his horrific efforts to retain his bank. Film after film, plot lines and characters are interchangeable, situations and places arise out of nowhere, but the central point is good ol' Lep. Take him to Vegas, take him to the outer reaches of space, the hood, back 2 tha hood, whatever, wherever.

Fifteen years after the original, I've finally gained an appreciation for a series of films that I never thought I would. After six films, I want more. And, more and more. Now that Trimark has faded away and their library has since been absorbed by Lionsgate, the possibility of these films continually being pumped out is much less likely (Lionsgate did produce one post-Trimark sequel in 2003), but it's my belief that LGF has got nothing to lose. Take a lucrative brand with straight-to-video production values, a built-in fanbase and one central idea milked over and over again and you've got... dare I say it... gold.

As the Lep himself would say, "I want me gold!"
That makes two of us!
Posted by Nathan Martin at 11:45 PM No comments: 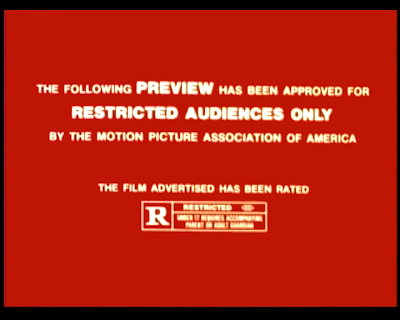 I've been harboring this one for a while now...
CineCraze Trailer Park

Basically, I've created a sub-blog to this one, the sole purpose being to serve as a resource for trailer listings. Whuh? You see, I'm obsessed with movie trailers and I'm forever on the quest to find certain ones. For example, if I wanted to find the trailer to Mike Nichols' WOLF, I'd be out of luck on the laserdisc and DVD release. But, the trailer is available on other Columbia/TriStar releases, such as THE KING OF MARVIN GARDENS and THE LAST DETAIL (both featuring Jack Nicholson). But, if I wanted the original teaser, I'd have to seek out a rental videocassette (circa 1994) which might feature it as a "coming attraction".

Early rental VHS copies of PITCH BLACK contain the teaser to Rob Zombie's HOUSE OF 1000 CORPSES. Notable, as the film was produced by Universal and later dropped, leaving the film in distribution limbo for the next three years until Lionsgate embraced it.

Why the obsession with movie trailers? I suppose I've been spoiled by the riches of DVD and LD over the years and come to expect these things. As of late, trailers seem to be left out of prominent DVD releases. Paramount is notorious for leaving these elements out of their releases (especially when they release classic films to DVD). Great example: Peter Bogdanovich's TARGETS contains no trailer, yet a clip of it(!) is shown in the retrospective featurette provided on the disc! WTF?! When I picked up their first DVD issue of SOME KIND OF WONDERFUL, I wasn't shocked that no extra features were offered, but it wasn't as if they had no access to the material. The teaser for the film can be found on the initial home video of the John Hughes/Howard Deutsch sister production, PRETTY IN PINK. "Hey Paramount, would you like to borrow my copy of the VHS you manufactured?!" One better, a few years after the initial release, a "special edition" was released with a load of supplemental material, yet still no damn trailer! Argghhh!

At any rate, the sub-blog that's really not a blog, but a listing of VHS (thus far, I'll move on to LD and DVD later) is a pet project of mine and perhaps I can make into into a valuable database at some point, as I have yet to encounter one with the same focus.
Posted by Nathan Martin at 11:57 PM No comments: