Just came across this terrific interactive "education" on Britain's "Free Cinema" film movement of the mid-1950s thru early 60's. Yes, it's informative. But, the best part is that it's hosted by the great Malcolm McDowell. McDowell is the perfect host for this tour, being that he is a protege of legendary filmmaker Lindsay Anderson, one of the innovators of the movement.
On the first go through, I was able to answer most of the questions correctly, but then, I found much more amusement in deliberately answering them wrong or taking way too long to make a move, because the ritualistic reward of being berated by McDowell is priceless.
TAKE THE TOUR!
Then, do yourself a favor and check out the complete collection of films on DVD:
Region 2 release
Region 1 release

UPDATE
I've since had the opportunity to meet Mr. McDowell at this year's Texas Frightmare Weekend in Grapevine. Needless to say, he was extremely cool. I mentioned how much I enjoyed the BFI Free Cinema thing, to which he replied, "You saw that?!" 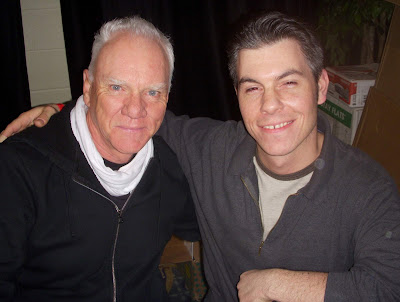 Posted by Nathan Martin at 8:24 PM No comments:

National Rambo Day is nigh! Since Lionsgate is releasing the lastest installment of Sylvester Stallone's lucrative RAMBO franchise on January 25th, it's my belief that this day should be forever regarded as National Rambo Day. In fact, I'm going to go on record as the guy who declared it that way. You're welcome!

In less than 30 hours, I will be enjoying the first showing of RAMBO at a midnite screening, which I'm more than ecstatic about. I've been waiting a year for this. The last time I was this excited about a film (year long anticipation, mind you) was in 1995, with Michael Mann's HEAT. Mark my words, this film will be good.... damn good.

Stallone is back and I feel like an 8-year-old, all over again.
Hell yes.

Posted by Nathan Martin at 10:43 PM No comments: