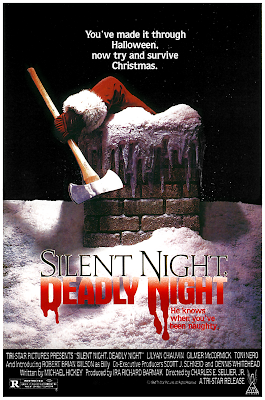 Most folks either love the films or loathe them. For me, they're all guilty pleasures. Never 100% genre classics in the conventional sense (the first is the closest, while the 3rd has the benefit of a most-skilled director, Monte Hellman), but fun nonetheless.

So, I've beeen waiting feverishly (okay, not really) for December 11th to arrive, so I could check out the latest DVD release of the original by Anchor Bay. Of course, this isn't the first time SILENT NIGHT, DEADLY NIGHT has appeared on DVD. Anchor Bay previously released a double feature DVD in 2003, containing the original film in it's uncut, restored form along with the notoriously bad SILENT NIGHT, DEADLY NIGHT, PART 2. 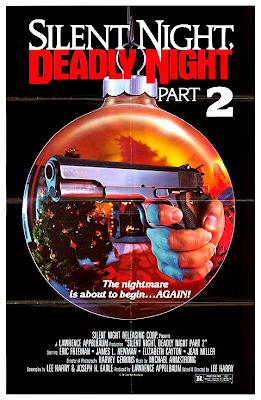 While I was thrilled to have these films on DVD, it always irritated me that neither a theatrical trailer nor TV spot was included for the first film (there was a trailer included for "Part 2"). How could this be? Anyone who knows the history of SNDN also knows that the film itself wasn't the cause for the tremendous uproar from parental groups everywhere. Rather, it was the actual publicity materials (movie posters and televised commercial spots, especially) that sparked the true controversy. There had already been Christmas-themed horror films, some even involved Santa-suited psychopathic slasher fiends, but none of which received the degree of SNDN's multimedia marketing saturation. These were the ads that freaked out the mass public and ultimately won SNDN it's forbidden reputation. Overwhelmed by the astounding negative attention (including a slew of horrible reviews), the film's distributor, Tri-Star Pictures, withdrew it from circulation and eventually disowned the film entirely. Ironically, Tri-Star distributed the (north) polar-opposite, family-friendly SANTA CLAUS: THE MOVIE the following year. 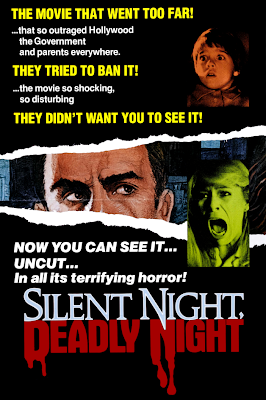 Perhaps, I've been spoiled, but I've come to expect such goodies from Anchor Bay and I was truly disappointed to find that no trailers or TV spots were made available. So, when I learned of a new edition, I was hopeful that it might include SOMETHING more... anything. With the latest DVD firmly in hand, my eyes delighted to the words "theatrical trailer" advertised prominently on the back cover. That was all the incentive I needed to plop $13 at the checkout counter. Sadly, after a quick spin in my DVD player, I discovered these words held no such relevance. No trailer to be found. Even though the packaging boasts "one of the most controversial slasher films of all time... uncut, uncensored and back like never before," this is the exact same pressing as the '03 release. Such a phrase should indicate a fresh presentation of sorts. If by "like never before" Anchor Bay truly meant that this release features newer, over-blurbed packaging and that the disc is no longer a double-sided double feature, then perhaps the statement is correct. 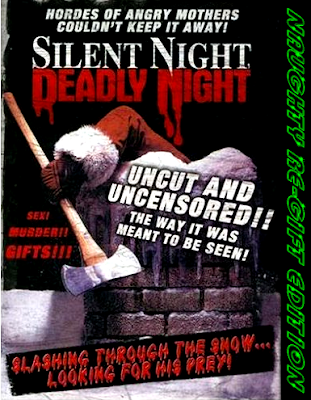 On the subject of having no new special features, why didn't Anchor Bay consider doing an interview with Miss Linnea Quigley just for this disc? It could have been easy. They actually had such an opportunity after previously interviewing her for their NIGHT OF THE DEMONS release. "Hey, Linnea... might we ask about SILENT NIGHT now... for a possible future DVD re-release?" Guess not.

To summarize, really what we have here is a re-hash of Part 1 only, in exactly the same presentation as before. The catch being that this DVD is in print while the other is not. I want my thirteen dollars back... like never before!

Posted by Nathan Martin at 4:33 PM No comments:

Here's my latest nod. A "mash-up" (that's what the kids call 'em, these daze) of movie trailer moments that are all movie, all from trailers and are all actual moments! Would you believe?
Posted by Nathan Martin at 9:48 PM No comments: